He was born and brought up in an Orthodox Christian family of Thalavadi Mammoottil in Kuttanad taluk of Allepy District, Kerala on 5th May, 1965 to Late Mr. Kurain Philip and Late Mrs. Mariamma Philip. He was born again on April 14, 1980 during hisSunday school years in St. Thomas evangelical church - a divided group from Marthoma. On realizing the truth in the doctrine of water baptism, he was baptized on 5th January, 1981 in Thalavadi Church of God. Having come to faith alone, he had to face several oppositions from his family. During a fasting prayer in 1981, he was anointed by the Holy Spirit on the 21st of September. Since he had a burden for the lost souls and a calling for the ministry, he had the opportunity to work with Operation Mobilization (OM) after his pre-degree course. And so, he have had chances to work in the states of Kerala, Karnataka, Tamil Nadu, Madhya Pradesh, Uttar Pradesh and Rajasthan. Following his father’s death, he had to leave OM. Later he joined with IM and was able to pioneer some churches in Karnataka by God’s grace. 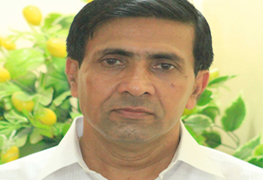 After that period, he served with another church in Malabar. In 1986, he joined the Bible college and pastored a church in Mundakayam simultaneously. In 1989, he joined with Church of God and ministered in Pallipad, Paathipara, Moothedam, Pathanamthitta Town, Vechoochira and Mulakazha churches. He had the opportunity to bring many people to the kingdom of God and baptized them. Wife, Saramma Cherian (Mercy) is the fifth daughter of Late Mr. K.T.George (Thalavadi George Sir) and Late Mrs. Mariamma George. Her father, an anointed prophet, passed away the age of 49, on account of an illness for which he refused to take medicines. He had served in the ministry of God with prominent ministers like Koodal Kunjmon, Variyapuram Yohannan, etc. His daughters are Hephzibah Mercy Cherian (Pharm D), Keziah Mariam Cherian (student in Canada) and Gifty Sara Cherian (Class 5). He pray that his tenure in Kuwait will be a blessing and a cause of growth for our church. 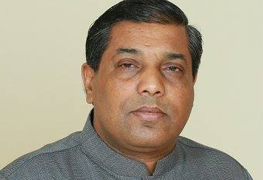 To be born in a Pentecostal family is a privilege in itself. Pastor Varughese Abraham was born as the third son of Late Pr. Abraham Varughese and Late Mrs. Thankamma Abraham in 1964. His childhood home was in Karuvatta Village of Alappuzha District, Kerala. Being raised up in the Christian doctrines and knowing the truth in them, he received Jesus Christ as his Lord and personal Saviour during a family prayer at the age of thirteen. He was filled with the Holy Spirit and also underwent water baptism at the same age. When he was seventeen, a desire to study the Word of God took root in his heart. He joined Mulakkuzha Bible College in 1981, graduated in Theology in 1984 and Missionology in 1985. After the completion of his Biblical studies, he worked for the Lord in various places in Kerala. By the grace of God, Pr. Varughese Abraham ministered in Kuttickal, Kattappana, Kumali, Konni, Vechoochira, Pathanamthitta and Pullad. In all these places God used him mightily for the expansion of His Kingdom.

He was able to win many souls for Christ and drag many others from the clutches of sin and destruction. He also gave leadership to building churches and parsonages in Konni and Vechoochira. He established the churches of Kattappana and Kumali and hence was their pioneer Pastor. He was the District pastor of Kozhenchery since 2009 and the local Pastor of Pullad church. He was also a member of the Evangelism Board and the Church Growth Mission of Church of God, Kerala State when he was appointed as the Pastor of Kuwait Church of God in 2011. His family consists of his wife, Mrs. Annamma Varughese, who is a blessed lady fully supporting him for the Lords ministry, and their three children, Nigin Abraham Varghese, Achsah Rose Varughese and Joshin Abraham Varghese. Nigin has completed his B.E. in Electronics and Control Engineering and a Post Graduate Diploma in Industrial Automation. Achsah is currently taking her Doctorate in Pharmacy (D.Pharm.) in Bangalore. Joshin is presently studying in the Sixth standard in Indian Central School, Kuwait. In addition to his deep knowledge and understanding of the Word of God, he is endowed with many gifts of the Spirit. May the Lord use him and his family to reap more harvest during these last days in Kuwait.

He was born on 4th Dec.1951 as the 5th of six children of late Mrs.& Mr.C.M.Mathew, Sankaramangalam, Eraviperoor, Tiruvalla. He used to attend the Marthoma Church and on 13th June 1971, while coming back empty hearted from the church, two friends met on the road and shared the gospel truth. On the Tiruvalla-Kozhenchery road itself he committed his life to Christ. That was the turning point of a sinner and the birth of a Servant of God. On the second day he attended a Pentecostal prayer with his younger brother Joseph Mathew C (Prasad Sir) and their father furiously turned against. Scolding, threatening, beating & harassment continued and expelled from home when late Pr.M.V.Chacko baptized him on 31st Oct.1971. Even though after few days home entry was given, the struggle for faith continued for years. Father started "Sankaramangalam Industries" and Thomas was managing it for 4 years. Finally got relieved from it and joined Mulakuzha Bible College in 1975. Got married on 21st Oct.1976 with Susan, the daughter of late Pr.T.C.Mathew, Peniel House, Mundiappally. 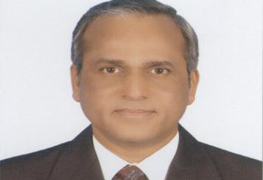 In 1978 Thomas & family moved to Bhutan and worked in a Hydel Project for 2 years while leading the fellowship over there. He arrived Kuwait on 25th Feb.1980 and by God's grace joined Al Ahli Bank of Kuwait and worked for 22 years, while taking part in gospel work along with the pastors of Church of God. In 1984 a bible class was started at Fahaheel and in 1989 Church of God, Fahaheel Branch was formed. Even though he was the pastor of churches at Mannarakulanji, Poovathoor, Nellimala, Thuruthikad for short periods and in Bhutan for 2 years, he had no difficulty to be a faithful church member and assist the pastors in Kuwait for 16 years from 1980 to1996. We should learn from this quality. In 1996 Pr.Thomas was asked to take charge of Fahaheel Church and ministered there for 12 years. Many souls were added to the church. In 2002 since the ministry enlarged, he got relieved from the position of a Bank Officer and involved in full-time ministry. Pr.Thomas took charge of Kuwait Church of God in 2008 and completed 3 years tenure and is leaving Kuwait back to Kerala in order to take charge of Mylapra Church and Pathanamthitta East District. As a recognition of his selfless service for the Lord he was chosen as the first President of Church of God Kuwait Region also. The 31 years Pr.Thomas Mathew (our beloved Thampy Pastor), an ordained minister, spent in Kuwait was worth and fruitful and a blessing not only to the Church of God but also to other churches in Kuwait. His wife Susan is a blessed lady who supported the ministry in every possible way. Their elder son Evg.Jerin Mathew Thomas is the Staff Counselor of ICPF, Pune and is being mightly used by God among teens & youths. Jerin's wife is Dr.Nisy, who is blessed with a son on 28th April 2011. Younger son Joel Mathew Thomas is a blessed youth with his Mech.Engg.Degree and M.S. in Automotive Engg. who joined as an Analyst in the famous "Austin Martin" Car Company, United Kingdom. 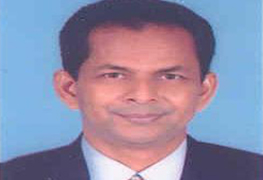 He was born in Adimali village in Idukki District, Kerala in the year 1955. He was the third son of Mr.Estapanos and Mrs.Annamma Estapanos. They belonged to a orthodox Jacobite family. His father, a politician was a drunkard too. Even in this situation, his mother brought him up with reverence to God and good virtues. After losing peace in the family, they visited many pilgrim places. This act of going for pilgrimage did not bring any relief. Meanwhile, an evangelist who had received Jesus Christ and came from a Hindu background came to their place and started ministry work. Through him, they learned and understood the biblical truths and its meaning. Pastor M.E.Baby received Jesus Christ as his Lord and personal Saviour on 7th June 1973. He was filled with the Holy Spirit and also underwent water baptism the same month. During this period, he had a desire to study the Word of God in order to completely understand the biblical truths. While studying, he recognised that his calling was for winning the lost souls for Jesus Christ.

After completion of his studies in 1977, he worked in different places in Idukki district and other districts of Kerala. By the Grace of God, he had an opportunity to minister in different places namely Chettukuzhi, Chinnar, Trichur, Pakkil, Vechoochira, Elampel, Kuwait and Kunnikkuzhi. In all the places he went, God used him for the expansion of His Kingdom. He was able to win many souls for Christ and also plant new churches. Since 2009, he is the District Pastor of Payyanamon and local pastor of Konnappara -Konny church. He is also a member of Evangelism Board (Church of God). His wife Marykutty Baby is a blessed lady who is fully supporting him for the Lords ministry. They are blessed with three children, Blessy Philip John, Grace Bibu and Blesson M B. Blessy is married to Philip John and they are blessed with 2 kids Lydiya and Ayden. Grace is married to Bibu T Poulose. Both families are settled in Kuwait. His younger son Blesson has done his MBA in Finance and currently working with NFBC, Trivandrum as a Branch Manager.

Ministry at KCOG is not just a job - it's our life! Each one of us plays a different role, but we are all working toward the same goals of seeing life change happen through our work as we partner with God.